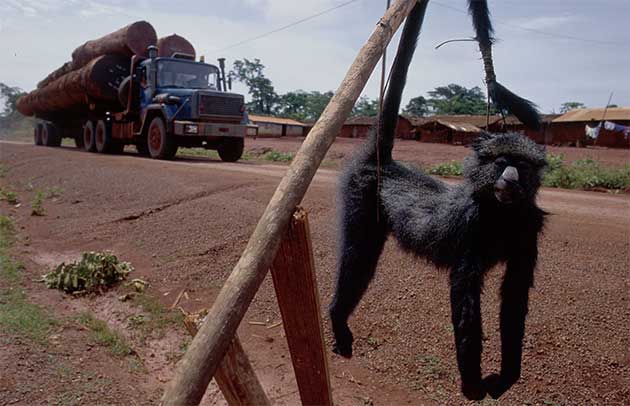 Golden Monkey (Cercopithecus mitis ssp. kandti) Endangered in IUCN Red List. In Cameroon, 1999 bushmeat was openly on sale along the road as 100-year-old trees were illegally logged and transported. Today large primates face the same fate, even if not so openly. Credit: Steve Morgan / Greenpeace

BHUBANESWAR, India, Sep 2 2021 (IPS) – As Arti Prasad rode the Kuala Lumpur Pavilion mall escalator up to the third floor, a pair of luscious lips pouted down at her. Next to the towering and oversized lips, the vibrant red shades of lipstick on the giant screen immediately caught the 36-year-old Indian tourist’s fancy.

Prasad headed straight to the cosmetic outlet and bought all four of the advertised lipsticks. She, like many others, is oblivious to a baby Orangutan’s plight – orphaned when its forest home was burned down to grow the palm oil that went into these beauty products. Primary forest losses mean that only 10% of gorilla habitat will remain in the Congo Basin by 2032.

Deforestation, a significant threat to biodiversity and climate change, is accelerated by global demand for commodities. However, a considerable share of this agro-commodity production is intended for export – driving massive deforestation and conversion of natural ecosystems in the global south.

The Food and Agriculture Organization of the United Nations (FAO) estimates global forest areas declined by 129 million hectares between 1990-2015, equivalent in size to South Africa.

Data from satellite imagery released on Global Forest Watch in June 2020 recorded 3.75 million hectares of tree cover loss in humid primary forests in the tropics in 2019, an almost 3% increase from 2018 and the third-largest tropical forest loss since 2000.

Consumption patterns of G7 countries (Canada, France, Germany, Italy, Japan, Britain, and the US) drive an average loss of 3.9 trees per person per year, over 15 years from 2001-2015, says a study published this year in Nature.

The International Union for Conservation of Nature (IUCN) will hold the IUCN World Conservation Congress in Marseille, France, from 3-11 September 2021. This premier conservation event will address global deforestation. More importantly, Congress motion 012 – the fight against imported deforestation – was co-sponsored by numerous IUCN Members and voted on and approved before Congress.

The IUCN Congress meets every four years to tackle the most pressing issues impacting people and the planet. This IUCN Congress in Marseille will drive action on nature-based recovery, climate change, and biodiversity for decades to come.

Congress motion 012 calls on countries to stop imported deforestation through several ambitious strategies, including imposing additional taxes on imported products that generate deforestation.
The aim is to recommend that private companies establish concrete action plans to guarantee supplies that did not result in deforestation.

Red-faced spider monkeys (Ateles paniscus) are found in undisturbed primary rainforests, in northern Brazil, Suriname, Guyana, French Guiana and Venezuela. Because of its ability to climb and jump, it tends to live in the upper layers of the rainforest trees and forages in the high canopy. With habitat loss and hunting it is listed as Vulnerable on the IUCN Red List. Credit: la Vallee des Singes

The list of imported agricultural products contains, first and foremost, soy, palm oil, cacao, beef and its by-products, rubber, timber, and derived products that do not come from sustainably managed forests. Others include coffee, tea, or even cane sugar, which impact the deforestation and conversion of natural ecosystems.

“The most recent IPCC and IPBES reports show that we are now at the point where significant and permanent changes to consumption patterns and legislative regulation can no longer be delayed,” David Williams-Mitchell, Director of Communications, European Association of Zoos and Aquaria (EAZA) told IPS via email. Netherlands-based EAZA, an IUCN member, is one of the co-sponsors of Congress motion 012.

More than 50% of global forest loss and land conversion is attributable to the production of agricultural commodities, and forestry products are driven by consumer demand, as shown by a 2020 WWF study on Switzerland’s overseas footprint for forest-risk commodities.

To end deforestation, companies must eliminate 5 million hectares of conversion from supply chains each year.

In 2017 alone, the international trade of agricultural products was associated with 1.3 million hectares of tropical deforestation emitting some 740 million tonnes of carbon dioxide – this is equivalent to nearly a fifth of the EU28’s total greenhouse gas emissions that year.

“We need countries all over the world to participate in the fight against imported deforestation. We need to learn to use local resources and establish sustainable sources for exported products, especially without harming the forests,” says Jean-Pascal Guéry of Primate Conservation Trust. This France-based IUCN member also co-sponsors Congress motion 012.

IUCN Member ERuDeF, co-sponsor of Congress motion 012, estimates that half of the tropical forests worldwide have been destroyed since the 1960s. Every second, more than one hectare of tropical forest is destroyed or drastically degraded.

“Deforestation and conversion-free supply chains must protect not only forests, but all the terrestrial natural ecosystems threatened by the expansion of commodity production and trade including savannahs, grasslands, and peatlands among others,” Romain Deveze, WWF Switzerland’s senior manager, sustainable commodities & markets and co-author of the WWF 2020 study told IPS.
“It is vital that people understand that their choices and the frameworks that allow them to make those choices are at the heart of the solution,” Williams-Mitchell concurs.

“As governments, science engagement institutions, schools, and other providers and facilitators of education, we need to act to ensure this level of understanding at all levels of society,” Williams-Mitchell says, explaining why EAZA is sponsoring the motion.

Guéry is critical of some of the efforts to combat deforestation.

“There is awareness (too late, in our opinion) in certain European countries of the deleterious effects of this imported deforestation, and the French initiative to establish a national strategy to combat imported deforestation is commendable, but it lacks ambition and does not set binding and short-term goals,” he said.

“The assessments of companies including distributors, manufacturers, operators, rely too much on self-assessment rather than establishing an independent external certification,” Guéry said.

WWF also mentions that despite more initiatives to halt deforestation, including certification, corporate commitments, and market incentives, the rate of commodity-driven land use doesn’t appear to be declining. This means the negative impacts on local people and nature continue. 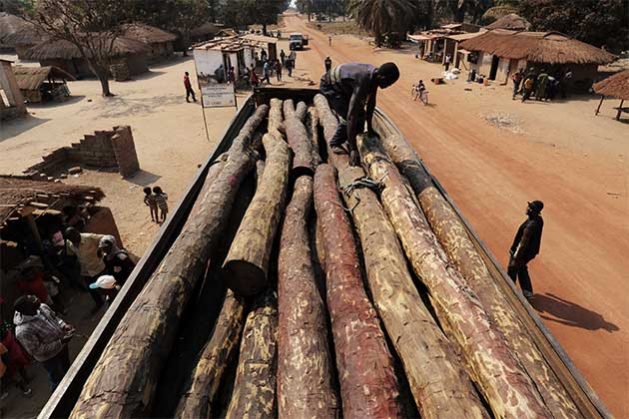 A full truck loaded with 60-70 Mukula logs at Katanga Province, the Democratic Republic of the Congo, 2016. Around 8-10 trucks transported out Mukula logs every day. Mukula is a rare and slow-growing hardwood unique to southern and central Africa, illegally logged and traded from Zambia and DRC. Credit: Lu Guang / Greenpeace

In a study earlier this year, Greenpeace said that “certification is a weak tool to address global forest and ecosystem destruction.”

By certifying their products as ‘sustainable,’ some certification schemes can help guide consumption choices and have a positive impact locally, “but it is (largely) greenwashing destruction of ecosystems and violations of Indigenous and labour rights.”

So, while buyers think they are making the right ethical choice, they might still buy products linked to abuse and destruction.

However, WWF’s Deveze says, “certification and legality are critical to halt deforestation at scale. A hectare of conversion is just equally as harmful to people and nature whether or not it is done legally.”

Ranece Jovial Ndjeudja, Greenpeace Africa’s campaign manager in Cameroon, told IPS in a Zoom interview, “the limitations to the policy effectiveness for the IUCN Congress motion on imported deforestation is increased taxation aimed at deterring forest clearing. This, however, cannot always prevent deforestation.”

“Companies would just increase production to compensate for the tax hikes,” Ndjeudja said, speaking from Yaoundé, where Cameroonians rallied in early August to demand EU stop deforestation for rubber production.
“It is industrial logging and industrial agriculture which is the problem. Are these industrial productions really bringing in a large revenue to the exporting governments? No. If it did, Cameroon and Congo would not be so poor. A small group gets rich. While Cameroon’s natives lose access to food, health, and their culture,” Tal Harris, Greenpeace Africa’s international communications coordinator, told IPS from Dakar, Senegal.

The Democratic Republic of the Congo (DRC) hosts the second-largest contiguous tract of tropical forests globally, including roughly 60 percent of the Congo Basin rainforest. It is home to plants and animals found nowhere else on earth.

“A government cannot work out of a capital city thousands of miles distant from such extensive forests,” Harris said. “Devolution of power to the local population is necessary.”

Cameroon’s Ndjeaudja echoes this. To ensure trees are not cut, there is the need to work with local communities because, for generations, they have been living with forests and have the knowledge of their sustainable management.

“We have a lot to learn from them and must allow indigenous communities to share this knowledge,” he said.

Deveze concluded: “Economic and technical incentives are required to shift producer behaviour. At an international policy level, go for differentiated custom tariffs based on sustainability requirements and due diligence processes. Compensation mechanisms to support farmers in protecting high conservation value areas should be amplified.”