Halima Elias Mtwethe from Mtepa Village in southern Tanzania is one of the smallholder farmers who borrowed from the Mahanje Savings and Credit Co-operative Society (SACCOS). Credit: Isaiah Esipisu/IPS

MADABA/MAFINGA, Tanzania , Mar 31 2021 (IPS) – Small agricultural loans, disbursed through mobile phones and targeting specific farming activities at different phases of production, have more than doubled food productivity among thousands of smallholder farmers in southern and central parts of Tanzania over the past three years, improving their livelihoods.

IPS travelled the region this month and spoke to many farmers who attested to how the new form of controlled village-specific lending resulted in their successful harvest.

Peter Lulandala, a smallholder farmer from central Tanzania’s Iringa Province, is one of those farmers.

Lulandala is servicing a TZS one million ($312) loan he borrowed from a local community bank. The problem was that once the money had been paid out to him in a single instalment he was unable to keep aside the funds for the various farming phases.

“We could borrow money, which was usually given in a single batch mostly during the planting season. For most of us, it was extremely difficult to keep part of the money in our houses or on personal bank accounts just to wait for the weeding or harvesting season.

“As smallholder farmers in the villages, we have many urgent things that always require cash. For example, it will be very difficult to see my children go to bed for the second day in a row without food and yet I have cash under my pillow or in my personal account,” Lulandala told IPS.

That was until three years ago when an innovative new money lending product became available in his village. Through the new model, smallholder farmers who belong to particular groups (like farmer groups or reside in certain villages), are expected to save some money with a targeted financial institution before borrowing three times their savings.

“This is an innovative product introduced to us by the Alliance for as Green Revolution in Africa in collaboration with the Small Entrepreneurs Loan Facility (SELF) project to help smallholder farmers access agricultural finance, and to help them use the money for the intended purpose,” said Khassim Masengo, the manager of Mahanje Savings and Credit Co-operative Society (SACCOS) in Madaba District, Ruvuma Province, southern Tanzania.

Farmers are guaranteed by two signatures of fellow group members. What makes the SACCOS lending different is that once the loan is approved, the farmer can only access it in phases.

“We disburse it in three phases so that the farmers can only access what they need during the planting season, then the second disbursement can only be released at the right time for weeding and top-dressing, and finally the last payment is for harvesting and post-harvest handling,” Masengo told IPS.

Lulandala said the new lending structure has worked for him.

“But since this particular cash is kept by the bank and with an agreement on how it will be disbursed, I will always look for an alternative way to feed my children as the money waits for the intended purpose,” said the farmer who hails from Itengulinyi village, 15 kilometres off the main highway that connects Makambako and Iringa towns.

The farmers are expected to pay back the loans after harvest.

“Once they harvest, we encourage them to keep their produce with particular warehouses, and based on the warehouse receipts, we can give them personal loans worth half of their produce for immediate domestic use or further investment as they wait for better prices,” explained Masengo.

According to Hedwig Siewertsen, the head of Inclusive Finance at AGRA, many African smallholder farmers fail to achieve their full potential because they have no access to agricultural finance.

She said that unless farmers have collateral to show that they can pay back loans, banks would not loan to them. Siewertsen noted that there was need to come up with innovative means through which smallholder farmers can access agricultural finance without necessarily offering collateral.

“Our main aim is to improve the quality, cost-effectiveness, access and impact of financial and agribusiness products and services for smallholder farmers in Africa,” said Siewertsen. 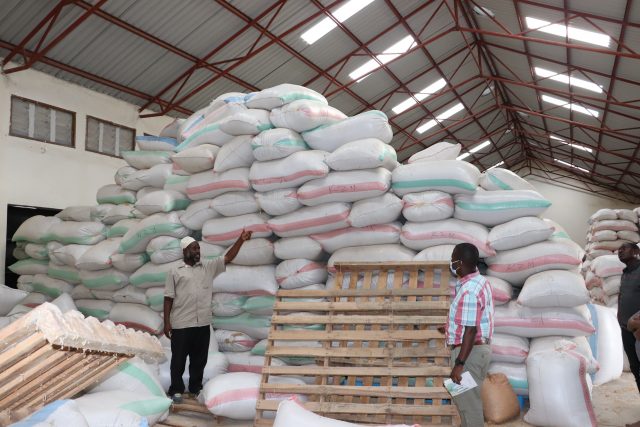 Farm produce at the Igodikafu Warehouse in Mbuyuni village, Pawaga Ward in central Tanzania. Based on the warehouse receipts, the Mahanje Savings and Credit Co-operative Society (SACCOS) can give farmers personal loans worth half their produce for immediate domestic use or further investment as they wait for better prices. Credit: Isaiah Esipisu/IPS

According to the Food Sustainability Index (FSI), created by Barilla Centre for Food and Nutrition (BCFN) and the Economist Intelligence Unit, increasing food productivity is vital, given the population growth and intensifying climate change. And this, according to the report, can only be achieved through new innovations.

It also notes that sustainable agriculture needs funding and this is particularly difficult in developing countries.

“It can be hard to funnel money in from investors, particularly for developing countries. In the FSI, the top ten countries most likely to attract investment in sustainable agriculture are all European, with the exception of the US and Israel. And while most countries in the index offer some form of public financing for agricultural innovation, 12 countries—nine of which are in sub- Saharan Africa—do not,” the report notes.

Unlike MUCOBA Bank, which works with farmers in small groups of 10 to 15 members, Mahanje SACCOS works with villages. This means that SACCOS’s offerings are specific to members of these villages and it also allows for traceability and easy service provision.

It also gives SACCOS security because they are able to engage the borrowers in person and from their homes.

“For one to qualify for a farming loan from this SACCOS, the first requirement is that they must be descendants of one of the eight targeted villages, and that must be confirmed by the village elder of that particular village,” said Masengo.

“The main reason is that we need to work with farmers who are well known by the villagers, and whom we can access for extension services,” he said.

So far, 2,847 members of Mahanje SACCOS, among them 892 female farmers who hail from the neighbouring villages of Mahanje, Madaba, Lituta, Mtepa, Magingo, Mkongotema, Lukira and Kipingo in Madaba District, Ruvuma Province, Tanzania have become net producers of maize and beans over the past three years. They are now able to export their produce to neighbouring districts.

SACCOS has since been converted into a fully fledged bank registered by the Central Bank of Tanzania, and it is offering credit and savings services, but specifically for farmers from the eight target villages.

However, MUCOBA Bank, which is a community bank headquartered in Mafinga town in Central Tanzania, covers a larger area and targets smallholder farmers in far areas that do not have good infrastructural access to urban centres. It currently has some 50 farmer member groups.

“Our bank has agents who are also our agricultural extension officers on the ground whom we use to register farmers through farmer groups, then send us information via internet,” Philipo Raymond, the general manager for MUCOBA bank, told IPS.

With MUCOBA Bank, qualifying farmers are then given their money through mobile phones, and once they harvest, they can service their loans through the same digital channel.

“Besides receiving the moneys in batches to serve specific needs, use of M-Pesa payment has made it easier for us because we do not have to travel all the way to town, and we have reduced the risk of carrying hard cash in our pockets,” Emanik Mgwiranga, the chair of the Nguvu Kazi Itengulinyi farmers group from Itengulinyi Village, 44 kilometres from the nearest town, Mafinga, told IPS.

The main crops grown are maize, beans and rice, but some farmers also include Irish potatoes.

In addition, the Mahanje SACCOS has introduced indigenous poultry farming to cushion farmers when farming seasons fail or when market prices for their produce are still low.