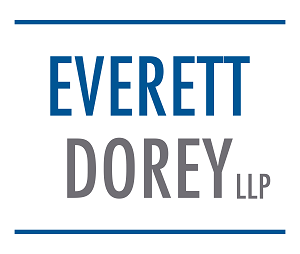 March 2, 2021. Santa Ana, California. In a highly anticipated catastrophic injury case both sides were represented by experienced trial attorneys who are members of the American Board of Trial Advocates (“ABOTA”). Irvine law firm Everett Dorey LLP founding partner Seymour “Sy” Everett for the defendant. Bradley Knypstra founding partner of the Newport Beach law firm, Knypstra Hermes Zermeno LLP for the plaintiff. The case was venued in Orange County Superior Court just south of Los Angeles County. The Court utilized an oversized courtroom, installed plexiglass dividers for witnesses, video cameras, and socially distanced jurors. The judge, attorneys, witnesses, and jurors were required to wear masks at all times. The courtroom was closed to visitors and the trial was “Live Streamed” on YouTube to accommodate public access.

When asked about the significance of an in-person jury trial during a Pandemic, trial attorney Sy Everett responded, “In-Person Jury trials must go forward as part of our Country’s commitment to the jury system. Orange County demonstrated that ‘in-person’ jury trials can be conducted in a safe and fair manner for jurors and the parties. We anticipate the rest of the country will implement similar safety precautions in their courtrooms to ensure access to justice.”

The Orange County “in-person” trial comes in the face of criticism lodged at other Courts around the country for refusing to allow “in-person” trials to go forward. Notably, Los Angeles County Superior Court recently faced legal challenges with people complaining of being exposed to the coronavirus when it decided to move forward with a limited number of “in-person’ trials. Other California Courts have decided to implement “Zoom” trials that have been at the center of controversy.

Lawyers on both sides, plaintiff and defense, have argued it is impossible to ensure jurors remain attentive to “Zoom trials” while sitting in their homes. Examples of jurors on exercise machines, watching their children or surfing the internet during “Zoom trials” have been cause for concern for all trial lawyers.

In the underlying Orange County case, plaintiff Christine Haynes was regarded as one of Southern California’s most successful Realtors, having claimed over $8 billion in sales in North Orange County. The defendant, City of Orange, is one of the largest cities in Orange County, California. Plaintiff claimed she tripped and fell on a 2 inch differential on a City sidewalk while canvassing the neighborhood for an Open House, causing lacerations to her face, a torn hip labrum, and fractured elbow that required extensive surgery and an implant to compensate for plaintiff’s bone loss. Plaintiff claimed loss of earnings, medical expenses, and pain and suffering.

Prior to trial, plaintiff’s counsel made a demand of $3 million, which was lowered to $950,000 at the start of trial. The defendant offered to settle the case for $250,000, only to have it rejected by the plaintiff.

At trial plaintiff’s counsel relied on two animated and vocal percipient witnesses, which demonstrated the need for “in-person” trials that rely on a jury’s ability to evaluate witness credibility based on personal characteristics and expressions. The two witnesses vigorously claimed the City was on notice of the “dangerous condition”.

During a pre-trial Zoom deposition, one of the two witnesses exclaimed “F**K the city” extorting the City should “Pay the Lady”. At trial, on cross-examination, trial attorney Sy Everett repeated the deposition testimony and accused the witness of being an advocate for the plaintiff. In dramatic fashion, the witness denied the statement and lunged forward behind the plexiglass, exclaiming Mr. Everett should have sympathy for the plaintiff but after further cross-examination admitted he never notified the City. Fellow Everett Dorey trial attorney Ashley Anderson noted the other fact witness claimed he personally called the City on 6 occasions but on cross-examination admitted his alleged complaints were 9 years before the incident. When presented with never before seen “Google map” impeachment photos, depicting the sidewalk 9 years before the incident, the witness apparently lost all credibility with the jury.

The jury returned a Unanimous Defense verdict for Everett Dorey’s client. On behalf of the City, Everett Dorey will seek to recover all costs and expert fees pursuant to California Code of Civil Procedure Section 998.

When Samantha Dorey, co-founding partner of Everett Dorey, was asked if she would recommend “in-person” trials to her clients, Dorey responded, “Yes. If Courts can protect jurors and parties by implementing well-reasoned safety measures and minimize the potential risk of contracting the Coronavirus, there is no reason that “in-person” trials should not proceed. Orange County Superior Court has paved the way for other Courts.”