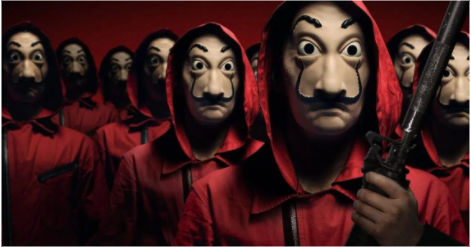 ‘Money Heist’ season 5 part 2 will be the final time fans will see the Professor and co. in action. Over the years, fans have loved the fantastic twists that the series has presented. One of the biggest ones comes at the end of the final episode of season 5, part 1. Yes, we are talking about the death of Tokyo.

It shocked the entire audience of the Spanish series. But on the other hand, it hyped up the last part astronomically. So with that being said, let’s shed some light on the release date of the series. The final part of the series will arrive online on December 03, 2021. As usual, the release time will be 12:00 AM Pacific Time (PT)/3:00 AM Eastern Time (ET)/12:30 PM Indian Standard Time (IST).

If you still haven’t watched Money Heist season 5 part 1, you can help yourself out by checking our streaming on the same. Moving forward, let’s take a look at where to watch Money Heist online.

Money Heist fans around the world will be left reeling by the shocking end to season five, part one, which landed on Netflix on Friday 3rd September.

Fortunately, they won’t have to wait long to find out how this epic crime saga is going to end, as the final batch of episodes are just weeks away, scheduled for release on Friday 3rd December.

The streaming service announced the Money Heist season five release schedule back in May, with a tweet and teaser trailer for the show’s stunning conclusion.

Money Heist season five was first announced in 2020, with the renewal coming as no surprise after the fourth outing dominated Netflix’s top 10 list around the world upon release.

Filming on Money Heist season five wrapped in May 2021, as confirmed by Netflix, which shared an image of the cast along with the caption: “Thank you to all the fans for being part of La Resistencia! We can’t wait to show you how this story ends.”

When will Money Heist Season 5 Part 2 be on Netflix?

The final part of Money Heist will be released on Netflix globally on Friday, December 3rd, 2021.

If you’re looking to stay up or get up early, here’s the release schedule for Netflix globally:

By now, there is no doubt that everyone is aware of where to watch the beloved Spanish series. If you don’t know, then the answer is streaming giant Netflix. You can check all the previous episodes of the series right here.

Also, make sure to purchase a subscription to the platform. Otherwise, you will not be able to enjoy the conclusion of one of the best series ever created.

When we left off in the jaw-dropping Money Heist season five, part one ending, fan-favourite character Tokyo had just sacrificed her life for the team, but a behind the scenes teaser has confirmed that Úrsula Corberó will return to the role via a flashback cameo (as well as continuing as the show’s narrator, as we heard in the trailer).

It remains to be seen whether the two will find some common ground, or if Sierra will turn him over to the cops despite his crucial help delivering her baby.

The Professor has had luck converting people to his cause in the past, most notably Raquel Murillo aka Lisbon, played by Itziar Ituño, who is one of the characters currently fighting to escape the Bank of Spain.

Also trapped in the heist are longtime team members Rio (Miguel Herrán), Denver (Jaime Lorente), Stockholm (Esther Acebo) and Helsinki (Darko Peric), who is badly wounded after his legs were crushed in an explosion.

We’ll also discover the final fate of the newer additions to the team Manila (Belén Cuesta), Rodrigo de la Serna (Palermo) and Bogotá (Hovik Keuchkerian), the latter of whom still craves revenge for the death of his love, Nairobi.

He may have missed his chance as unhinged head of security Gandía (Manuel Poga) may have perished in Tokyo’s final grenade attack, but this is yet to be confirmed.

On the villain side, fans are curiously waiting for word on whether the much-despised Arturo Román (Enrique Arce) will get through the final season alive, with his condition recently stated to be “critical” by Colonel Tamayo (Fernando Cayo).