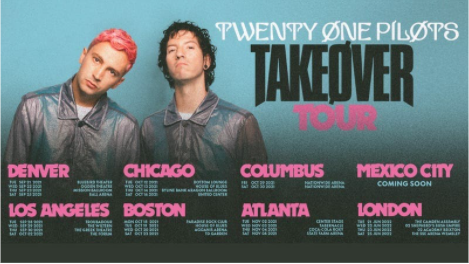 The Famous American Duo twenty one pilots run by Tylor Joseph and Josh Dun have recently announced their Icy tour. From the past few years, twenty one pilots have been very active in concerts and tours. Next year they are also planning an international run. The tour has already started on November 21 2021 from the Mexican Corona Capital. The band will then hit Europe and start their American run from August 2022 at St Paul, MN Xcel Energy centre. This duo will continue to cheer the American nation till September 24 and entertain with their climax concert in the state of Washington. The duo will visit and entertain fans of 22 cities throughout the United States between these dates.

The band was formed in 2009 in the city of Ohio, Columbus by Joseph Tylor along with Nick Thomas and Chris Salih. After they both left in 2011, the band was managed by Joseph and drummer Josh Dun. The duo has proved to be extremely successful after their singles, Ride and Heathens. The fan base and fame have to lead them to earn a Grammy Award for Best Pop Duo/Group Performance at the 59th annual Grammy Award Ceremony. Their album Vessel, which was released in 2013, has at least gold certification on every song. They are the first band in the history of music whose two albums have received either gold or platinum certification on every single piece.

When Will The Tour Kicked Off?

The tour has already begun on November 21 2021. They will make their run on European soil and will hit American shores on August 18 2022.

What Is The Schedule Of The Tour?

The tour is planned to be multi-national. They started from Mexican soil, and among their huge list are the Netherlands, Germany, Great Britain, Poland, Belgium, France, Spain, Ukraine, Russia, Czechia, Romania and the United States.

What Albums And Songs Will They Sing On Their Tour?

It is still not sure, but there is a high probability that they will sing songs from their album Scaled and dry. The famous songs of this album include good day, shy away, the outside, Saturday.

When Will The Tickets For The Icy Tour Be Available?

The registration for tickets is already open on Ticketmaster’s verified fan platform. To purchase a ticket and to get more information visit their site http://www.twentyonepilots.com/tour.

How Much Does The Ticket For The Icy Tour Cost?

At this moment, it is uncertain how much the ticket will cost. But how much it would be worth the entertainment and energy at their concert.

The post Twenty One Pilots Tour 2022 : Where to Get Tickets, Dates & Concert info appeared first on 360PRWire.