Fox News is not officially commenting on the record, but it seems the right-wing talk network is quietly trying to distance itself from Tucker Carlson’s 1/6 trutherism.

That’s the takeaway from this story by Daily Dot’s David Covucci. He wrote on Friday that after his outlet published a story on Carlson’s 1/6 special series, titled “Patriot Purge,” the Fox News PR department reached out.
Fox PR intended its request to be off the record, but Covucci correctly noted that *both* parties must agree to go off the record before it is binding. “The Daily Dot did not agree to Fox’s demand when it was sent this quote, and thus is not bound by the request,” Covucci explained to readers. “Plus, you should know that even Fox News wants to distance itself from Carlson’s documentary.” 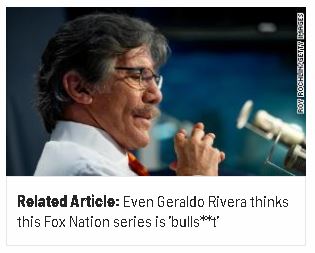 So what was the request from the unnamed spokesperson? According to Covucci, it read as follows: “Can you please add so it’s clear that these new episodes are for FOX Nation? The subscription-based streaming platform is behind a paywall. I don’t see that noted anywhere in the piece. Tucker Carlson Originals is not for the channel.”
That’s, of course, not something you would want outside news organizations to stress if you were genuinely proud of the work. It’s hard to imagine that Carlson will be very happy when he learns of this. It is also worth noting that while the entire 1/6 docuseries will indeed be behind a paywall on Fox Nation, some of this content will almost certainly make its way onto Carlson’s prime time show.
>> A reminder of the big picture here, via Brian Stelter’s report for “Don Lemon Tonight:” The Murdochs are supporting “false flag” fear-mongering. Does it really matter if the conspiracy theories run on TV or online?

But you can understand why the C-suite bosses in NYC are wanting to distance the network from Carlson’s craziness, even as they allow it to keep airing. The channel is facing significant scrutiny over the forthcoming conspiracy series, including from prominent Republicans like Liz Cheney — someone who is not backing down in her criticism of Carlson.
After Cheney on Thursday called out Carlson for promoting 1/6 trutherism, the Fox propagandist invited her on his show. When Cheney declined, Carlson called her a coward. But he did not include the statement Cheney’s spokesperson provided the show, explaining her rationale for not appearing.
Cheney spokesperson Jeremy Adler posted that statement on Friday, showing the email exchange he had with Carlson’s booker. The statement Adler had provided Carlson’s show read, “Tucker has had countless opportunities to explain to his viewers that the election was not stolen. Instead, he continues to promote dangerous conspiracies using the language that provoked violence against law enforcement and our Capitol on January 6th. Liz will not participate in that.” Oof…