The Green New Deal-like policy initiative aims to transform our country’s energy system to 100% renewable energy and create high-paying jobs. With the Democrats controlling both the House and the Senate, it’s a policy initiative that needs to be taken seriously. If implemented, the project will entail a huge change to America’s energy infrastructure and the economy.

The Green New Deal-like initiative is a package of policy changes that seek to mitigate climate change’s worst impacts. The goal is to eliminate non-renewable energy production as electricity sources by 2035. That net-zero target is focused on electricity generation, but the administration’s policy initiatives will impact more than the energy sector.

Many academics and experts commend the goal of achieving net-zero carbon emissions from the energy sector. There is scientific consensus on the dire ramifications of climate change. Equally, we have seen with our eyes some of the impacts of climate change that scientists predict. That includes more frequent and intense droughts, storms, and the melting of polar ice.

Regardless of what you think of the initiative, significant obstacles will need to be addressed to reduce US greenhouse gas emissions. The graph below shows US economy-wide GHG emissions. 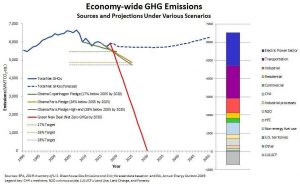 As you can see from the graph, the two biggest culprits of greenhouse gas emissions in the US are the electric power and transportation sectors. We’ll have a quick look at both sectors in the remainder of this article.

The US has a diversified energy grid. According to figures released by the US Energy Information Administration, 62.6% of energy is produced from fossil fuels. The largest component is natural gas, which accounts for 38.4%, followed by coal at 23.4%.

Renewable energy accounts for the smallest percentage of total energy generation from the three energy classifications. As the graph below reveals, growth has been rapid.

You can see from the graph on the right that the US Energy Information Administration predicts solar will become an increasingly important element of the energy mix in the coming years. Wind energy will also see a steady increase, while hydroelectric and geothermal energy production remains relatively stable.

The graph on the left shows the overall predicted energy mix. You can see the expected rapid decrease in coal use, which is offset in the short term by the increasing use of renewable energy. Natural gas, meanwhile, will remain relatively stable and then increase over time.

Natural gas is one of the cleanest forms of fossil fuel energy. It is used widely across different sectors of the US economy. 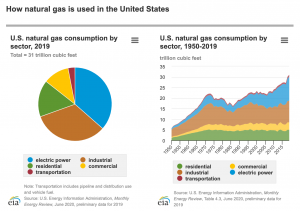 Most experts would say that Joe Biden’s goal to remove fossil fuels as a source of energy production from the US power generation sector completely by 2035 will be difficult.

Mitigation efforts will be important for businesses that use gas and power stations that burn gas. Environmental monitoring and compliance testing will be one key element of the process. Technical compliance solutions that help measure gas flow in a stack or duct, like continuous emissions monitoring systems, will play an important role.

Joe Biden has already unveiled one part of his plan: the electrification of the federal government transportation fleet. The plan unveiled by Biden earlier this year will see the US replace its entire federal fleet of 670,000+ petrol and diesel vehicles with electric vehicles.

Other elements of the plan will focus on upgrading transportation rail networks and the installation of 500,000 electric vehicle charging stations. Providing the national infrastructure for electric vehicles will likely speed up electric vehicles’ general uptake by businesses and the general public. 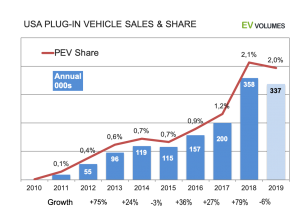 As you can see from the graph above, the share of the market for EV in the US has been steadily rising irrespective of government support. As more affordable electric vehicles become available, supported by a national infrastructure, we can expect steady growth in market share.

While the move towards EV will reduce the use of gas, it will increase the demand on the grid for electricity supply. Gas and renewable energy will be part of the answer to these problems.

It’s natural for a new administration to enter office with grand plans. Prior administrations have followed a similar path. Joe Biden’s Green New Deal-like policy is one of his flagship domestic policy initiatives. How that policy will be implemented and the impacts that this policy will have on the national economy are still unclear.

In the short term, greenhouse gas emissions reductions will require monitoring and carbon capture and offset initiatives for power stations powered by fossil fuels. That goes alongside the growth of the renewable energy sector. We will need to wait until the end of this President’s term in office to assess his policy’s success.

The post Understanding the Implications of the Green New Deal Like Plan appeared first on Financial Market Brief.