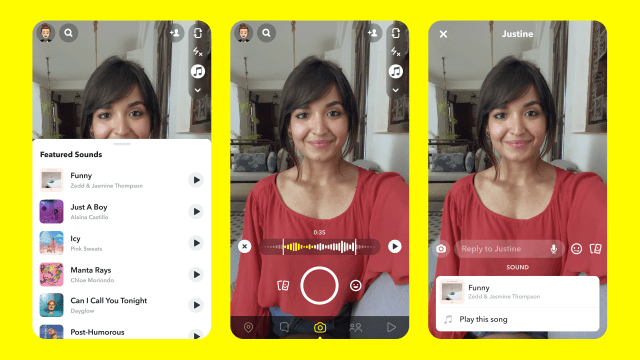 Snapchat will soon get a little more like Instagram and TikTok. The app is working on an update that will allow users to add music to their snaps, the company revealed.

With the update, users will be able to add songs to their snaps either before or after they begin shooting. The company has already struck deals with a handful of labels, including Warner Music Group and Universal Music Publishing Group, which will let the company access their catalogs.

The new feature is already rolling out as a test in Australia and New Zealand, and will launch widely in the fall, according to a Snap spokesperson. Though the feature is still a far cry from many of TikTok’s core features, like lip syncing or re-mixing videos, adding music could still help Snapchat compete with its rivals. Music has proven to be a popular feature on Instagram (which is reportedly set to release its own TikTok competitor soon), and deals with music labels would lay important groundwork for any future music-powered features.

“We’re constantly building on our relationships within the music industry, and making sure the entire music ecosystem (artists, labels, songwriters, publishers and streaming services) are seeing value in our partnerships,” a spokesperson said in a statement.

The update comes as TikTok’s future in the US is still somewhat uncertain. Microsoft confirmed it’s still working on a deal, but the details have yet to be hammered out. Facebook also recently ramped up its music features with official music videos in News Feed.