To-Be-Dated: These two artists stand over a cauldron and decide to mix in the potions of pop and jazz to bring forth a spectacular piece of music never before seen. With this goal in mind, Evan Main decided to take on Gio Nation’s “You Know What I’m Talking About” in a stunning new interpretation.

When Evan was first approached for this project, Gio was surprised by his eager disposition & willingness to be involved. Many musicians feel that collaborations between different genres are very constraining as they struggle to put their own spin on it. For true artists, every piece they create must have originality in it.

For Evan, a partnership would not only be an outlet for self-expression but an opportunity to work with material that genuinely resonated with him.“I think this song is worth listening to because Gio and I legitimately put ourselves into it, as musicians and as artists. We committed to it, Gio had a concrete vision and a powerful vision when he first wrote and recorded this song, and I developed my own personal vision for how I could play it when presented with the opportunity to do so.” ~said Evan Main on why people should listen to his and Gio Nation’s work.

Acoustic stripped retellings of songs strip away what we see as smoke and mirrors to reveal the essence of the voice, the melody and the essence of a song’s sturdiness and versatility. Gio Nation chose to cover a stripped version of his debut to help people listen to the lyrics carefully and understand the frustrations of the dating world. He also knew that with Evan he was in good hands. 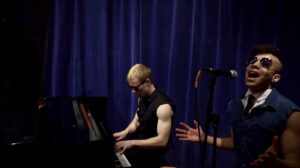 “My working relationship with Evan was like a Ying to the Yang. I am very boisterous while he is calm and collected. Our styles compliment each other”

Gio Nation also gave thoughtful advice to budding musicians struggling through the music industry. He believes that an artist should know what they want and believe in themselves unapologetically.

“If you don’t believe in yourself firmly, someone is going to create those beliefs for you. You need to believe in every cell inside your body to the point where nothing can stop you from achieving what you want”

Inspired from his life experiences, Gio Nation strives to convey his life lessons to people through his music and help them overcome their skirmishes. Gio Nation’s Collaboration with Evan Main is a representation of how two aspiring musicians can come together to create the most artistic pieces that can inspire millions.