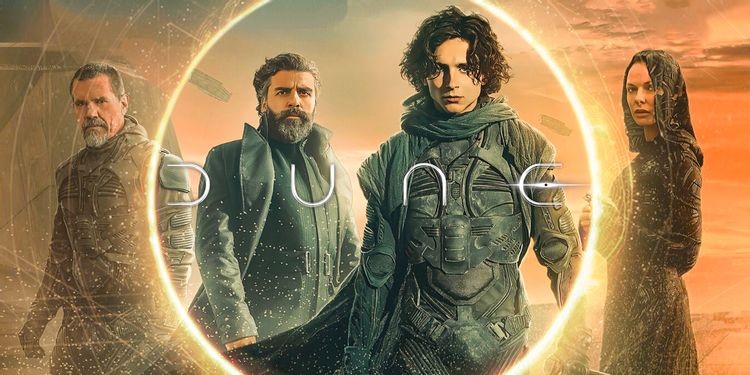 We’re nearly a month away from what could be Timothée Chalamet‘s biggest weekend ever. That’s right, both Dune and The French Dispatch are set to hit theaters on the same weekend in October, and we’re ready for both star-studded movies to take the world by storm. But as per HBO Max‘s new Warner Bros. release schedule, is Dune only heading to theaters? Or will we get to watch that one from the comfort of our own homes? We’ve got all the deets surrounding the release of Denis Villeneuve‘s space epic.

Based on Frank Herbert’s classic sci-fi series, Dune follows a young Paul Atreides (Chalamet) as he fights for the safety of his family on the most dangerous planet in the universe. The cast for Dune is stacked: Zendaya, Oscar Isaac, Rebecca Ferguson, Jason Momoa, Stellan Skarsgård, Dave Bautista, Javier Bardem, Josh Brolin, and other power players will star in this new adaptation.

Want to get in on the battle for Arrakis? Here’s when Dune will release on HBO Max and in theaters.

When will Dune be out?

Dune had its world premiere at the Venice International Film Festival earlier this month on Sept. 3, and later released internationally on Sept. 15. If you see either of those dates when you search “Dune release date,” don’t be confused — those aren’t the U.S. release dates.

Dune will release in theaters Stateside on Oct. 22. But what about the HBO Max release date, is that the same? Keep reading to find out.

What is the Dune HBO Max release date?

Though it’s currently making rounds in the festival circuit, Dune will release simultaneously in theaters and on HBO Max on Oct. 22. The film will stream for free to HBO Max subscribers on the non-ad supported tier for 31 days before leaving the platform.

What time will Dune be on HBO Max?

How to watch Dune on HBO Max?

If you’re already ramping up for Dune, we suggest subscribing to HBO Max ASAP. The streamer currently has a flash sale on their subscription cost, bumping the cost down by 50%. Instead of paying $14.99 for the Ad-Tier of the streamer, you only have to pay $7.49 for the next six months if you subscribe by Sept. 26. Go get that deal now over at HBO Max‘s website.

In four words? “Out-of-this-world.” While we already summarized the first reactions out of Venice, Rotten Tomatoes has the film at an 88 percent fresh.

“Dune occasionally struggles with its unwieldy source material,” reads the critics consensus, “but those issues are largely overshadowed by the scope and ambition of this visually thrilling adaptation.” Folks are comparing the film to 2001: A Space Odyssey, saying “Sometimes you just know when you’ve seen an all-time great.” Apparently, Villeneuve’s Dune falls into that category.

Is there a trailer for Dune?

Of course! Scroll up to watch the trailer for Dune. Get a load of that space worm!

‘Dune’ Is One of Hans Zimmer’s Most Ambitious Scores, and It’s Now Streaming:

“The sound of ‘Dune’ wraps itself around you in a way that I haven’t ever experienced before, and now you finally get to hear it,” Zimmer said.

Regardless of what you think about Denis Villeneuve’s massive sci-fi epic “Dune” when it hits theaters — and HBO Max! — on October 22, Hans Zimmer’s score certainly helps make the case to hear the epic film via the best possible sound system. The full soundtrack album is now streaming wherever you get your music, and the Spotify playlist is embedded below.

“The sound of @DuneMovie wraps itself around you in a way that I haven’t ever experienced before, and now you finally get to hear it,” said the Oscar-winning Zimmer. Will the new film turn out his twelfth Academy Award nomination? He won in 1995 for “The Lion King.”

Apparently the scope of “Dune” is big enough to inspire two original Hans Zimmer scores. It was already known that Oscar winner Zimmer was composing the original score for Villeneuve’s “Dune” theatrical release, but now io9 has confirmed that Zimmer has written additional and separate original score music inspired by the making-of “Dune” book that is being published in tandem with the film’s October release.

As reported by io9: “The Oscar-winning composer of ‘Dune’ was so inspired when he looked at the upcoming behind-the-scenes book from Insight Editions, he decided to write some musical accompaniment. ‘The Art and Soul of Dune,’ written by the film’s executive producer Tanya Lapointe, will have a dedicated Zimmer score available to download and stream upon release on October 22 — the same date as the film’s debut — and the book will be available both in standard and limited editions.”

The standard edition of “The Art and Soul of Dune” costs $50, but the limited edition will run just under $600 and be limited to only 700 copies. The special edition features 80 pages of exclusive art from the movie, and each copy is signed by author Lapointe, director Villeneuve, cinematographer Greig Fraser, and stars Timothee Chalamet and Josh Brolin. Also featured is exclusive on-set photography by Fraser. Both the limited edition and standard editions of the book feature in-depth interviews with Villeneuve, Chalamet, Rebecca Ferguson, Oscar Isaac, and more.

Anyone who has been following the making of “Dune” probably isn’t too surprised to hear Zimmer has composed original music for a making-of book release. Zimmer ranks Frank Herbert’s “Dune” as one of his favorite childhood books and couldn’t turn down the opportunity to compose the score for Villeneuve’s movie, even if that meant passing on composing the “Tenet” score for frequent collaborator Hans Zimmer.

“I have to do [“Dune”],” Zimmer said ahead of production. “Chris [Nolan] understands I have to do it. He’s going to be just fine.”

Last summer while he was in the thick of composing the “Dune” original score, Zimmer said he was “driving everybody crazy because I’m so full of ideas.” The composer said working with Villeneuve was “totally and utterly inspiring.” Listen to the soundtrack below.

Dune’s sequel won’t depend on the first movie’s performance in theaters but on how well it does on HBO Max, showing the importance of streaming.

Although Dune is yet to be released, a sequel is already planned, and contrary to what was initially believed, the chances of the sequel happening don’t depend on Dune’s theatrical performance but on its time on streaming, showing the importance of these platforms nowadays. The coronavirus pandemic was a big shake-up to the entertainment industry too, with theaters all over the world forced to close temporarily and studios reorganizing their schedules, and one of the most anticipated movies which had to be delayed multiple times was Denis Villeneuve’s Dune.

Based on the 1965 novel of the same name by Frank Herbert, Dune is an epic sci-fi movie and the first of a planned two-part adaptation given the richness of this universe. Set in the far future of humanity, Dune follows Duke Leto Atreides (Oscar Isaac) who accepts the stewardship of the desert planet Arrakis, the only source of a valuable substance that extends human life and more. Aware that it’s a trap set by his enemies, he takes his concubine Lady Jessica (Rebecca Ferguson), his son and heir Paul (Timotheé Chalamet), and his trusted advisors with him, but a betrayal and the presence of giant sandworms further complicate everything. Like the rest of Warner Bros’ 2021 projects, Dune will have a simultaneous release in theaters and HBO Max, and while the future of the sequel depends on the first movie’s performance, it’s not about the theatrical release.

In most cases, studios will wait to see how a movie performs in theaters and how much it makes at the box office before they can make a decision about a sequel, but even that has changed with the coronavirus pandemic. Although most theaters everywhere are now open and operating again, streaming services gained a lot of force during the pandemic as they became the main source of entertainment for the audience, and many studios sent their movies to these platforms so they could reach their audience and avoid being delayed further. The arrival of HBO Max made this easier for Warner Bros, who decided to give all its 2021 movies a simultaneous release in theaters and the platform, and in Dune’s case, the studio will measure its success through its performance on HBO Max rather than in theaters, showing how important streaming is now.

While a movie like Dune was made for the experience of watching it in theaters, it has bigger chances of succeeding in streaming than on the big screen. Although people are starting to go back to theaters, Dune is almost guaranteed to fail at the box office and not because of its quality or lack of it, as seen with other recent releases, like James Gunn’s The Suicide Squad, which got great reviews yet didn’t perform well on the box office, which is understandable in COVID times as most people aren’t comfortable returning to theaters yet. The future of Dune, then, will reportedly depend on how it performs on streaming, where more people are likely to watch it and thus it’s more likely that the sequel is greenlit, and it’s also a big opportunity for the studio to gain more subscribers given the magnitude and popularity of the project. This also speaks volumes about the importance of streaming services now, and how these can benefit studios and their future projects in times where movies can’t reach their full potential in theaters.

In addition to that, Dune already has a strong connection to HBO Max thanks to the spin-off TV series Dune: The Sisterhood, so its performance on the platform will be even more important for the future of the franchise. Warner Bros., HBO Max, and Dune are showing the importance of streaming services during and after the pandemic and the opportunities they bring, as well as a new way to measure the success of a movie and thus decide its future. Of course, Dune’s box office numbers will still be important, but they won’t be the decisive factor when it comes to greenlighting the sequel.