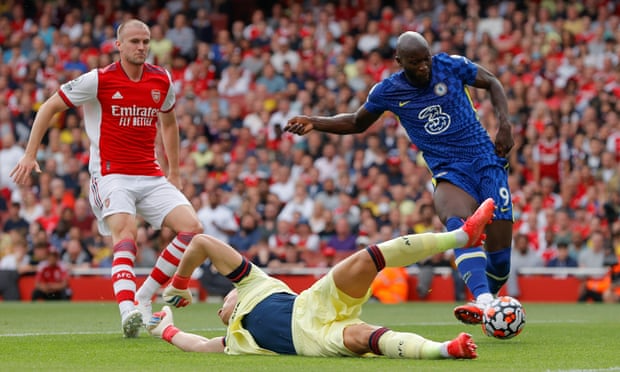 There were three minutes left when Arsenal’s fans finally started to head for the exits. They knew that they were watching a lost cause. Chelsea’s supremacy was never in doubt and the worry for Mikel Arteta, a manager who looks increasingly short of inspiration, is that the mood will turn toxic if Arsenal’s slide into mediocrity shows no sign of abating.

Pointless and goalless after their first two games, Arteta’s players must show their manager a response sooner rather than later. Arsenal were comprehensively outplayed by the European champions, who earned victory thanks to a debut goal from Romelu Lukaku and a smashing drive from the excellent Reece James.

The Emirates Stadium was an irritable place throughout. It was a surprise to see empty seats dotted around the ground, exposing the sense of drift hanging over this unhappy club, and it was not long before the apathy started to turn into anger. Forget about being glad to be back: patience was in short supply after Arsenal’s dismal defeat to Brentford last week – even if there was warm applause for Martin Odegaard when the £34m signing from Real Madrid was paraded shortly before kick-off – and there was something strangely reassuring about the home fans taking all of 18 minutes to start hammering their own players.

The boos that greeted the half-time whistle were entirely predictable, the initial optimism fading away as soon as Chelsea began to press at Arsenal’s defensive vulnerabilities. For all the defiance from Arteta, the attempts to create a siege mentality, the painful truth is that Arsenal’s flimsiness was impossible to disguise. Their bench was littered with deadwood – it is hard to know why players like Sead Kolasinac, Calum Chambers and Mohamed Elneny have not been moved on – and they were inferior in every area of the pitch, their weaknesses with and without the ball all too evident.

Everyone saw it coming, a sense of foreboding taking over when news emerged of Ben White becoming the latest Arsenal player to test positive for Covid-19. Willian, Alexandre Lacazette and Runar Alex Runarsson were already unavailable, while Pierre-Emerick Aubameyang was only ready for a place on the bench, and the loss of White hardly inspired confidence in Arsenal’s ability to contain Lukaku.

Rob Holding was an unsatisfactory replacement for the £50m centre-back. Lukaku’s performance drew memories of Didier Drogba terrorising Arsenal in his prime, while there were few scares for Chelsea at the back. Gabriel Martinelli offered nothing up front for Arsenal.

The early surge from Arteta’s side never truly convinced. There were a few promising moments from the hosts, Albert Sambi Lokonga offering a few nice touches in midfield, Emile Smith-Rowe testing Édouard Mendy with a fizzing drive from 20 yards, yet the truth is that Chelsea’s opener was so easy when it arrived in the 15th minute.

The move started with Lukaku pinning Pablo Marií, expertly shielding the ball from the centre-back, and picked up pace when Mateo Kovacic curved a lovely pass over the top to James, arriving unnoticed from deep to take advantage of a disastrous offside trap. Arsenal’s sluggishness was staggering. Cédric Soares was the defender playing James on and there was no sign of any response from Arteta’s back four once the danger materialised. Marí failed to stay with Lukaku and the Belgian was on hand to finish off the move, displaying his goalscoring instincts by bursting into the six-yard box to convert James’s low cross.

Lukaku was a constant menace, even though he had only played a solitary 45 minutes for Inter during pre-season. The 28-year-old gave Chelsea a focal point in attack, creating room for Mason Mount and Kai Havertz, and he was far too sharp for Arsenal’s centre-backs, bullying them throughout.

Arsenal looked scared. They tried to rattle the striker, Marí booked for a meaty challenge from behind, but it made no difference. Chelsea stayed calm, Jorginho and Kovacic slick in midfield, and it was not a surprise when they doubled their lead 10 minutes before the interval.

It was another smart goal, although the defending left much to be desired again, Lokonga and Soares somehow allowing Havertz to flick the ball to Marcos Alonso on the left. Alonso was away and Granit Xhaka’s desperate attempt to slow the move by fouling Lukaku made no difference. Paul Tierney played advantage after correctly spotting that Arsenal’s midfield had melted away and it was left to the outstanding Mount to release James, who capped a rampaging display by smashing his shot past Bernd Leno.

At least Arsenal mustered something of a response, Bukayo Saka seeing an appeal for a penalty waved away. Ever so briefly, César Azpilicueta, Andreas Christensen and Antonio Rüdiger were made to work at the back for Chelsea. Saka saw a deflected drive tipped over by Mendy at the start of the second half and Arsenal looked certain to pull one back just before the hour, only for Holding to head inches wide.

Yet the charge soon fizzled out, even with Aubameyang sent on for Saka. There was never any real prospect of a comeback and Chelsea always carried a threat on the break, Mount going close before Leno performed wonders by pushing Lukaku’s header on to the bar.

In the end Chelsea settled for 2-0. They had established their title credentials. Arsenal, who visit Manchester City, are heading in the opposite direction.